Between 1954 and 1975 there was increasing economic volatility and ongoing change to market conditions. Sigma was able to manage its way successfully through most of the issues thrown up by the times as it prepared its large new complex at Clayton as the base for the company’s continued operations into the late 20th century.  The period is defined by the move to Collins Street offices in 1954 and the final consolidation of the company at Clayton by 1975.  Ironically, it was the final move in Clayton which would inadvertently find Sigma faced by its biggest challenge ever.

In 1954, after a somewhat lacklustre profit result the previous year, the directors were pleased to report that ‘owing to efficient management’; Sigma had recovered quickly from the mild recession. The chairman, E.C. McClelland, told shareholders that with respect to the future, ‘the outlook has never been more promising’. Staff numbers had grown to just over four hundred, many of whom were being actively encouraged to pursue further educational courses to prepare them for future executive positions. For the first time, the balance sheet and accounts were presented with information about the company in an attractive illustrated booklet – a precursor of a growing emphasis on brand management and public relations.

The following year marked the beginning of the automation of accounting and processing procedures, with the installation of IBM punch card machines. An impressive new showroom opened at the head office in Collins Street and new records were achieved in all departments with ethical and Sigma penicillin products showing the greatest gain. In 1955 Sigma also formed Pharmaceutical Investments Ltd, a new subsidiary established to provide loans to chemists.

In his 1956 report to shareholders, the chairman, Dr Alan Cunningham stated that Sigma was now the second largest wholesale distributor to Australian chemists with its penicillin proprietaries far outselling any other make throughout the Commonwealth’. Haigh’s retirement, in January 1960, after thirty years with Sigma, marked the end of one era and the beginning of another. Also in 1960, work began on the factory at Clayton, a modern facility built with full air conditioning throughout the manufacturing and packaging departments, sterile air supply in the antibiotic department and a highly mechanised bulk store.

1964 saw a similar result to previous years – a satisfactory growth in sales, but higher operating expenses and a lower gross profit margin. In June Sigma launched its Toy Fair, which aimed to increase Sigma’s share of this lucrative market. Shareholders were invited to view the range of products displayed in ‘an attractive grotto setting’ at the Collins Street showroom.

Continuing appeals from the board for shareholder support of the company were a theme that dominated annual meetings and many of its communications during the 1960s. Rising costs, labour shortages and finding and retaining suitable staff were also ongoing issues. There had been a rapid increase in the number of new products entering the marketplace with consequent challenges for both retailer and wholesaler. Compared with the mid-1950s, when Sigma carried some fifteen thousand items in stock, the number had more than doubled in just a decade. Consideration was therefore ‘being given to eliminating the stocking of slow-moving lines with a consequent saving of shelf space, inventory and the attendant cost in buying, clerical and assembly staff.’

Since 1964, manufacturing capacity had been used to develop a successful export trade which supplied markets in New Zealand, New Guinea, Fiji, the Philippines, South East Asia and the Middle East. At the same time, the company also distributed and marketed imported products for sales under the Sigma label. For the retail chemist seeking to set up in a new pharmacy, renovate or extend and existing business, expert financial and real estate advice could be obtained from Sigma’s Pharmaceutical Investments Pty Ltd.

On a day to day basis, Sigma was managed by a team of executives who oversaw the various divisions of: wholesaling, pharmaceutical manufacturing, very colour photographic processing and printing, the pharmaceutical investment and advisory services, animal health preparations, marketing and agency agreements and export development. With more than a thousand employees the business supplied its products to retail pharmacies, hospitals and government institutions and had become well established as a prominent, vertically integrated pharmaceutical brand, known for its commitment to service and professionalism.

The 1970 annual report showed that net profit had dropped slightly for the second year in succession. Dividends were reduced to thirty cents per share (down from thirty-four cents) and the chairman stated that Sigma had now reached a stage where more than half its warehouse trading was conducted through branch depots – with the resulting in additional distribution costs. Nonetheless, it was felt that the resulting service to shareholders was ‘a necessary part of modern day pharmaceutical distribution.’

However, some of the trends already evident in 1970 had continued through the early years of the decade. Rising costs, industrial disputes involving the storemen and packers union and an uncertain economic outlook resulted in ‘pressures on profitability that could only be partly met by improved productivity.’ While dividends continued to increase, the board was also eager to contain and control costs. In early 1972 a commissioned report into manufacturing operations revealed that low profitability could be attributed to declining sales over the previous six years. The factory was ‘working well below its capacity and was at a point where it was ‘just fractionally above breakeven.’ Contributing factors were identified as costs associated with complying with the ‘Code of Good Manufacturing Practice’, government price controls and irregular contract work.

Various short, medium and long term strategies were recommended, including the appointment of a marketing manager and closer co-operation with Associated Drug Companies of Australia members. In November 1972 the board resolved that eight of its senior officers ‘shall not be dismissed nor their remuneration varied without authority’. In addition to the four long standing senior officers, the list contained two future managing directors (Brian Comben and Alan Fincher) the next board secretary (Keith Kleinert) and the next general manager of the wholesaling division (Reg Weller).

The early 1970s had also seen the sale of the Collins Street property to Mainline Investments for four million dollars. Sigma received a deposit with the balance to be paid when the building was vacated in 1974 and the city operations moved to Clayton. The outlook seemed very promising.

Shortly before the Collins Street sale was to be concluded, disaster struck when Mainline went into receivership. This difficult situation was made even more problematic for the board and management as Mainline was also the contractor building the new warehouse at Clayton. The company was facing one of the greatest challenges in its sixty-two year history with millions owing and tremendous uncertainty as to whether the new warehouse, upon which Sigma’s future depended, would be completed. 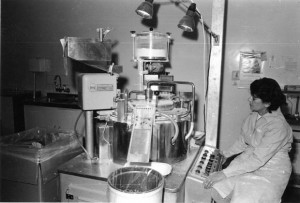