The period between 1938 and 1953 was characterised by steady growth for Sigma, accelerated by manufacturing opportunities during World War Two.  The profitability of the company allowed it to make some forward looking property purchases, but also to deal with the need for larger and more modern facilities as the company operations expanded.  The death of Sigma founder E.H. Leete in 1953 also brought the period to a close.

In January 1938, General Manager Ben Haigh’s report to the board began on a note of optimism when he informed its members that Sigma’s trading position ‘continues to be very satisfactory’. Sales in November 1937 had exceeded those of the previous year, which had also been a ‘peak month’ and it was clear that the business was doing well. Distributions to shareholders had grown from ?3,700 in 1934 to ?7,900 in 1937.

At the same time, however, the Board was very concerned that the worsening political situation in Europe could lead to war – an event which would have a major impact on Sigma’s ‘stocks, sources of supply and the acquisition of interests in Australian drug manufacturing concerns’. Haigh had taken the precaution of ordering additional stocks of overseas lines and the Board agreed that substantial reserves of drugs ‘must be held in an endeavour to give time for possible adjustment of buying sources in the event of hostilities breaking out.’

The beginning of 1939 was marked by a very hot summer, a series of devastating bushfires in Victoria and, for Sigma, the prospect of increases to the payroll and ongoing anxieties about the prospect of another war. When war did break out in September, the company’s most immediate concerns involved the possibility of air raids, labour shortages and regulations relating to restrictions on imports and petrol rationing. As with other essential services, pharmacists found themselves in a reserved occupation and confronted by the prospect of rationing and problems with stock availability, rising overheads, price controls, declining turnover, shortages of packaging and containers and difficulties with deliveries and transport.

The early months of 1940 saw increasing numbers of staff away on military duties, and early sales of what would prove very lucrative defence contracts – a major component of which was Sigma’s prophylactic outfits, medical panniers and a veterinary constitutional for horses and cattle known as ‘Horse Balls’.

The escalation of the war and especially bombing of England brought further worries regarding the supply of orders – all of which came by sea. The situation regarding ‘Security Stocks’ was becoming serious and it was decided that as a precautionary measure, Sigma’s entire current order for stocks would be ‘be duplicated for delivery from Canada or the United States.’

The 1942 annual meeting was attended by about forty shareholders and marked a new phase in the company’s development. The opening of a newly constructed factory at Port Melbourne in late 1941 saw the separation of manufacturing and wholesaling distribution activities (previously this had been conducted under one roof); the manufacturing division at Port Melbourne was named Tromax Pty. Ltd.  The chairman proudly declared that Sigma was now more than just a business ‘serving a few chemists.’ Rather, its success in meeting the demands placed on it by government had seen this ‘very satisfactory and progressive company’ confidently ‘take its place in the national life of the community’.

Severe government controls of prices and profit margins on goods supplied to the defence department saw a reduction in the profit recorded by Tromax in 1944, though the overall net profit announced at the annual meeting was an impressive £33,116  (compared with £20,299 in 1940). 1944 also saw a new focus on local sales, a policy resulting in a contract with the Victorian Railways to advertise Sterisol ‘in electric railway carriages for a two year period’ and a proposal for a radio program to be called Sigma Popular Melodies. There was a ten week session on Melbourne radio station 3UZ in connection with the Brains Trust program and ‘Sing as we Go’ on 3DB – both featuring advertising of Sigma products.

The last year of the war proved to be a highpoint in terms of profitability. The Melbourne Herald described Sigma’s result as ‘an all-time high for gross earnings’, an ‘increase in dividend’ and a profit of £37,000.  With the end of hostilities in Europe and the Pacific came a great sense of relief and a new optimism. Advances in medicine and the prospect of a wave of post-war prosperity promised a bright future. For Sigma personnel who had enlisted in the various branches of the armed services, their return to civilian life was marked by a special ‘Welcome Home dinner’.

The company made good progress during the second half of the 1940s. Many employees who had gone to the war had returned to their old jobs, staff numbers had increased to over two hundred and despite rising labour costs and a shorter working week dividends continued to rise. There were almost eight hundred shareholders (mostly in Victoria) and overall sales had increased dramatically. A day’s business ‘now often equalled an average month’s trade twenty years ago.’ Office and warehouse staff had been provided with uniforms, the very successful penicillin service had continued to expand and the veterinary preparation Penijec had been a ‘major development’ bringing ‘many thousands of pounds worth of profitable trade to country shareholders’, and satisfactory profits to the company.’

The board had determined that the city building would be retained as company headquarters, though steps would be taken to locate suitable suburban land and for manufacturing and warehousing. In March 1950 ten acres of vacant land in Centre Road Clayton were purchased for £3,100.  Three years later what was to become the head office in Collins Street was purchased for £65,000.

The early 1950s brought changes to the way in which the board interacted with management when Hobbs and Allsop were asked to attend Sigma and Tromax meetings respectively. Further, individual directors would be responsible for a particular aspect of the business, namely: Merchandising, Development and Research, Manufacturing and Warehouse Equipment and Accommodation and Finance. This division of the company’s activities represented an incomplete separation of wholesaling and manufacturing – something that did not occur for another twenty years when it was realised that the two activities were quite distinct activities with their own respective markets, competitors, technology, and skill bases.

During 1953 the board decided to contribute $500 to the University of Melbourne towards the maintenance of a biological assay unit, Haigh and Hobbs left for a visit to America, Britain and Europe where they were to investigate trends in manufacturing techniques, warehouse planning and for personal discussions with suppliers and others. W.D Scott were contracted to provide advice regarding the reorganization of office routines and accounting procedures.

1953 saw the passing of Ernest Leete, the man whose vision of a co-operative of pharmacists half a century before had succeeded beyond his wildest dreams. Against a background of post-war prosperity and optimism, Sigma was now well placed to take advantage of a raft of new opportunities. 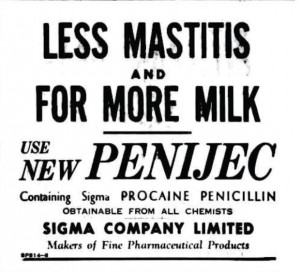