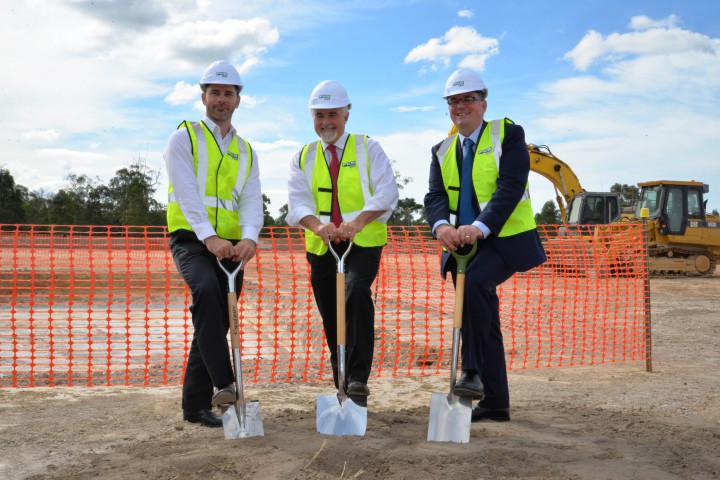 An official sod turning ceremony was attended by the City of Logan Mayor, Councillor Luke Smith and representatives from the Queensland Regional Economic Development.

Sigma’s Managing Director and CEO Mark Hooper said the $65 million investment in this new centre showed the company’s long term commitment to ensuring the most efficient and effective distribution of critically needed medicines to patients throughout Queensland.

“Sigma is Australia’s leader in full line wholesaling and distribution to pharmacies.  We need to continue to make major investments like Berrinba to ensure we look after our customers and their patients better each day, and to improve our cost base to offset the ongoing impact of PBS reform.”  he said.

Construction of the facility by FKG Group boosts the economy of south-east Queensland, creating up to 50 jobs on site during the construction phase.

City of Logan Mayor, Councillor Luke Smith, welcomed Sigma Pharmaceuticals’ decision to locate its business in one of the fastest growing regions in Australia.

“Sigma Pharmaceuticals’ decision to invest in our city adds to our reputation as a prime location for businesses with a focus on distribution throughout the region”, he said.

“I’m sure both Sigma Pharmaceuticals and the local community will prosper from this investment – it is a great choice for an environmentally friendly business.”

The new distribution centre, set over 15,000 square metres, will set the standard in the wholesale pharmacy sector for environmental sustainability, including a 250 kW solar installation to run the temperature controlled facility – one of the largest solar installations in the industry.  This system will generate 20% of electricity needs and reduce greenhouse gas emissions by up to 340 tonnes per annum.

Other features include energy efficient lighting systems and water efficient initiatives, including solar hot water and a 40,000 litre storm water collection facility to contribute towards a self-sustaining site.

“We have extensive experience building this type of infrastructure and are proud to be building Sigma’s latest distribution facility”.

The new facility is due for completion in late 2017.